The TLC actions were organized to address both the ongoing discussion over the cuts and reorganization of janitorial staff that took place between June and August 2015 as well as the hiring of non-union contractors for major construction projects by the university. This follows months of actions conducted by TLC in support of Tufts janitors — contracted by DTZ-owned custodial provider Cushman & Wakefield (C&W) — in efforts to renegotiate for stronger language in their contract, which expires July 31, as well as continuing to demand that Tufts hire union-only labor.

At the morning Jumbo Days event, following an address by Dean of Undergraduate Admissions Lee Coffin, student protesters stood in the aisles and behind the podium, holding banners that read “we demand safe working conditions,” “solidarity with Tufts janitors,” “justice for janitors,” and “people over profit.” Approximately 50 students had planned to participate in the protest, but not all of them were allowed into Cousens Gymnasium by admissions officers, according to students from TLC.

TLC member Sofia Adams said that the protest had been planned to take place during a scheduled address by University President Anthony Monaco. However, he ultimately did not address prospective students during the reception.

“[Monaco] was supposed to speak at the event and we know that he was there because some people saw him,” Adams, a senior, said. “We don’t know if he ended up not speaking because we were there or for some other reason, but I feel like there’s a strong possibility he didn’t speak because TLC was there.”

Monaco confirmed in a statement to the Daily via Executive Director of Public Relations Kim Thurler that the withdrawal of his scheduled speech was a reaction to the possibility of a protest. When the presence of TLC protesters at the event was clear, he said he felt that his presence would become a distraction from the student presentations, which were scheduled to follow his speech.

“When my schedule permits, I often say a brief hello to prospective students attending Tufts Jumbo Days,” Monaco said in an email. “This morning, when it became evident that TLC was planning to protest actions by the Tufts administration, I was concerned that my presence would distract from the presentations to be given by six current Tufts undergraduates to hundreds of prospective students and their families. I did not want to put those six students in that position, or make it difficult for our guests to see or hear the presentations. I decided it was best for me not to offer any remarks.”

Despite this schedule change, TLC members continued their protest, unfurled banners and remained standing throughout two of six student presentations to prospective students before voluntarily leaving the gym.

“We wanted to let prospective students know what is actually happening at Tufts because at Jumbo Days, and similar events [as well as] the way Tufts markets and advertises itself, it likes to maintain this image that it is all about social justice,” TLC member Zoe Jeka, a junior, said. “The language used is ‘active citizenship’ or ‘civic engagement’…but Tufts doesn’t uphold the values it makes public.  We wanted to let prospective students know that Tufts doesn’t actually maintain those practices and let the administration know that we won’t let them maintain that image.”

Coffin said that the university had not been expecting the TLC demonstrators, but the protests were courteously conducted.

“I mean it is what it is; that wasn’t part of our plan for the morning, but that’s part of the vibe of the campus and part of the student activists here,” he said. “They were respectful.”

Adams said she felt that the TLC protest was able to engage admitted students.

“[Prospective students] did seem interested, and we definitely got their attention, which was good,” she said.

Ari Liloia, a prospective student from New Jersey, said that he was happy to see the TLC action and thought that it was constructive.

“You can’t recruit really cool, smart students without expecting this kind of thing to happen, and I like that Tufts students are actually doing stuff… I like that [they] saw a problem and are taking the steps to fix it,” Liloia said.

Liloia added that he was at Jumbo Days to “get the full Tufts experience,” which he was glad included the protests against university labor practices.

“I’d rather not be lied to … no university is perfect, and I’d rather be told the things that are good or bad so that I don’t regret it when I come here,” he said.

At noon the same day, TLC members marched with janitors from the Mayer Campus Center across the President’s Lawn to Ballou Hall to deliver a letter requesting a formal sit-down between TLC members, Monaco and janitors affected by last year’s cuts.

“The letter is from workers asking to hold a meeting with Monaco to discuss the impact of the reduction of hours and changes,” junior David Ferrandiz said.

The protesters arrived at Ballou, amidst tour groups and prospective students. They stood outside the front doors chanting and speaking about the effects of the cuts on the janitors.

Janitorial workers Paula Castillo and Adelaida Colon attempted to deliver the letter to Monaco, who was inside the building, but Castillo and Colon were denied access by Tufts University Police Department (TUPD) officers posted outside the front and back doors of Ballou. However, Communications and Project Administrator Jacklyn Varela stepped outside the building to speak with Castillo and Colon, promising to deliver the letter to an administrative official inside. 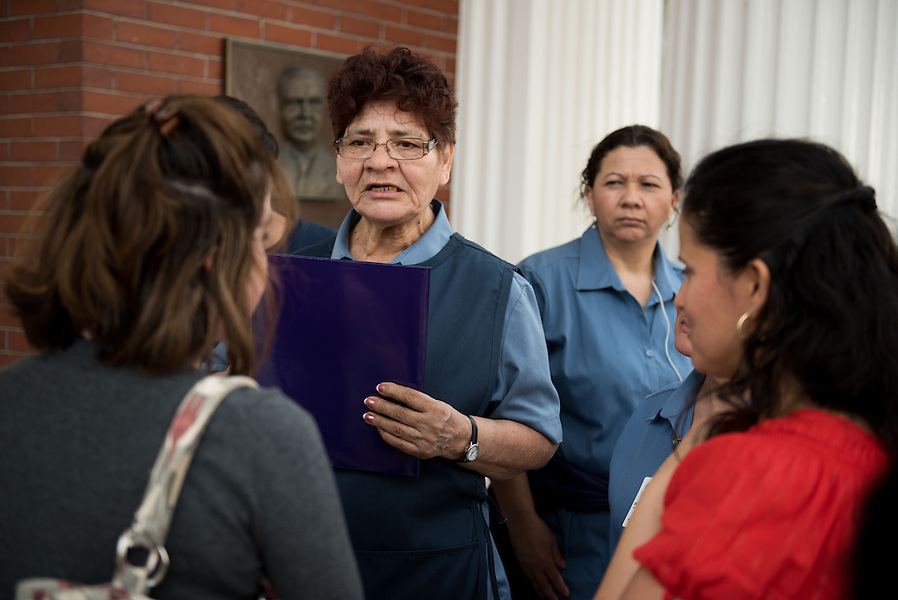 Colon addressed the crowd of students, emphasizing her commitment to follow-up on the letter.

“We want to be affirmed in our rights to exist in this workplace … If we don’t receive a response [to the letter], we’ll be back,” she said in Spanish.