Protestors from the Local 6 Union stand outside Cabot Intercultural Center with signs as President Monaco conducts a town hall meeting inside the building on April 5. Sofie Hecht / The Tufts Daily

University President Anthony Monaco hosted a Town Hall Meeting yesterday afternoon in the ASEAN Auditorium of the Cabot Intercultural Center to provide updates on the university and to offer students and members of the surrounding community an opportunity to directly ask him questions.

Preceding and throughout the meeting, members of the Boston Building Trades Council (BTC) stood outside of the Cabot Intercultural Center in protest of Tufts’ employment of non-union construction workers, with banners and flyers to distribute to passersby. According to Chelsea Feuchs, the hospital and higher education campaign coordinator for the Boston BTC, the protests were held in conjunction with efforts by students from the Tufts Labor Coalition (TLC), who staged an action during the question and answer session of the town hall.

“[Members of the Boston BTC] were there in part to voice our own concerns over issues that have been happening with building trades terms of building trades at Tufts,” Feuchs said. “We’re also there to help support the efforts of the students, of the janitors, of anybody else that is fighting for the rights of working people on Tufts campus.”

During the town hall, which was attended by administrators, community members, approximately 20 TLC members and a few additional students, Monaco spoke to attendees about Tufts’ progress on initiatives such as construction projects, fundraising campaigns and diversity efforts, as well as university news.

TLC member Edwin Jain asked Monaco the first question, expressing concerns about the safety standards of non-union contractor Turner Construction Company, which is working on the construction of the Science and Engineering Complex (SEC).

In the past, TLC has raised concerns that Turner Construction does not follow safe practices, citing their Madison Square Garden reconstruction project in 2012 which generated nearly $100,000 in fines for up to 70 safety violations, as described in a March 3 article in the Daily.

Chris McFadden, vice president of communications at Turner, said that the company is committed to establishing safe work sites.

“The people of Turner work hard every day to continually improve our safety program, processes and results,” McFadden wrote in an email to the Daily. “On the renovation of Madison Square Garden, we volunteered to participate in the New York City Department of Buildings Major Projects Program, which brought an increased level of scrutiny and transparency to our project … Many citations were addressed and/or dismissed with no penalty and we remedied all issues quickly.”

Jain, a first-year, asked Monaco whether the administration would be willing to “sign an agreement that would guarantee hiring union-only labor for large construction projects.”

TLC has previously pushed for such an agreement, called a Project Labor Agreement (PLA), which would bind Tufts to hiring union-only labor for its construction projects.

“We always want to get the best value for money using safety and other criteria when we hire contractors, but we have no obligation to hire union-labor,” Monaco said. “We put it out for competitive bid and go for the best value under the budgets we have for these projects.”

In a March 16 letter to the editor, Vice President of Operations Linda Snyder explained how the administration goes about choosing a contracting company.

“For projects of [a large] size, the university issues a Request for Proposal (RFP) to vendors with detailed requirements and specifications,” she wrote. “Vendors whose proposals meet our stringent requirements are invited to present to a selection committee. In addition to considering the architectural and technical merits of the proposal, we also consider factors that include safety records, experience on similar projects and overall cost.”

After the meeting, TLC member David Ferrandiz told the Daily that many other Boston schools have signed PLAs and that Tufts should be held to the same standard.

“Right now, schools of comparative size and space in the Boston area all sign onto this agreement,” Ferrandiz, a junior, said. “Tufts is definitely lagging behind in its commitment and not only that, but it’s failing to be a model as it strives to be.”

Ferrandiz said members of the community should continue to pressure the administration to sign a PLA.

“We’re really encouraging — and at this point pressuring — Tufts to do what’s right, to…affirm its commitment to construction workers on campus who quite frankly construct the buildings that us as students and beyond will be able to enjoy and use,” he said.

Following Jain’s question, Ferrandiz asked Monaco whether they would support janitor’s requests in the renegotiation of their contract, which will expire on July 31.

“We believe this contract is important because it determines things that affect janitors’ lives directly, like sick days, vacation days, wages, benefits and work schedules,” Ferrandiz said in his question.

In an April 4 post on their Facebook page, TLC described the janitor’s current contract as containing “weak language.”

“A strong contract is an opportunity to protect janitors from an administration that has consistently proven unwilling to hear and act upon the voices and concerns of janitors,” the post read.

Monaco responded by saying that the university does not play a role in the negotiations that occur between the Service Employees International Union (SEIU) Local 32BJ and the Tufts’ contracted custodial provider C&W. During this response, TLC members raised signs that read, “I SUPPORT TUFTS JANITORS.”

In his interview with the Daily, Ferrandiz conceded that the negotiations are between C&W and SEIU. However, he emphasized Tufts’ inherent responsibility in hiring contractors that mistreat its workers.

“[C&W] will not sign onto anything the university does not want, so that’s something the university, first of all, outsources with the objective of reducing accountability,” Ferrandiz said. “We’re saying that Tufts actually employs C&W to work in its interest, so Tufts is the puppeteer in that relationship and holds explicit control over what is agreed and what is not agreed to in that contract.”

Ferrandiz and Feuchs both said that the Boston BTC collaborates with TLC regularly so that the groups can support each other’s efforts.

Feuchs explained that beyond striving to support student initiatives on campus, the Boston BTC has striven to establish a relationship with university administrators in order to voice concerns over worker safety. She said that the two parties have had seven meetings — where Monaco, Snyder and Mary Jeka, senior vice president and general counsel, have been present — and that the Boston BTC has been consistently met with resistance.

“We were there to try to form a positive relationship and try to get protections for workers on their campus, and after being met with resistance seven different times, we finally had to say ‘okay, we need to proceed in our efforts to try to protect workers on this campus, even if the administration isn’t going to work with us on that,'” she said.

Feuchs said that despite several requests from both the TLC and the Boston BTC, the university’s safety standards have not been shared with the groups.

“We hope that they come around … we want partnerships, but we don’t think its okay to idly stand by while there are people who are being exploited on campus,” she said.

Feuchs added that in addition to trades workers, janitors and adjunct professors at Tufts should also be treated with respect by administrators.

“Tufts respects the right to respectfully express a diversity of views on all issues as long as such activities do not interfere with university operations, access or safety, and are within the law,” she told the Daily in a email. “As we have stated many times, including in a recent letter to the Tufts Daily, we select vendors through a competitive process that provides maximum quality and value.”

Feuchs said she finds the administration’s financial arguments for its decision-making “deeply problematic.”

“When you have administrators who are making as much as they are, when you have an expectation that somebody in their field [has benefits and financial flexibility], I’m not really sure why they think that the people who help build this campus, and keep it clean and teach the students, the people that really are the institution, why they don’t seem to think that those workers deserve the same rights,” she said. 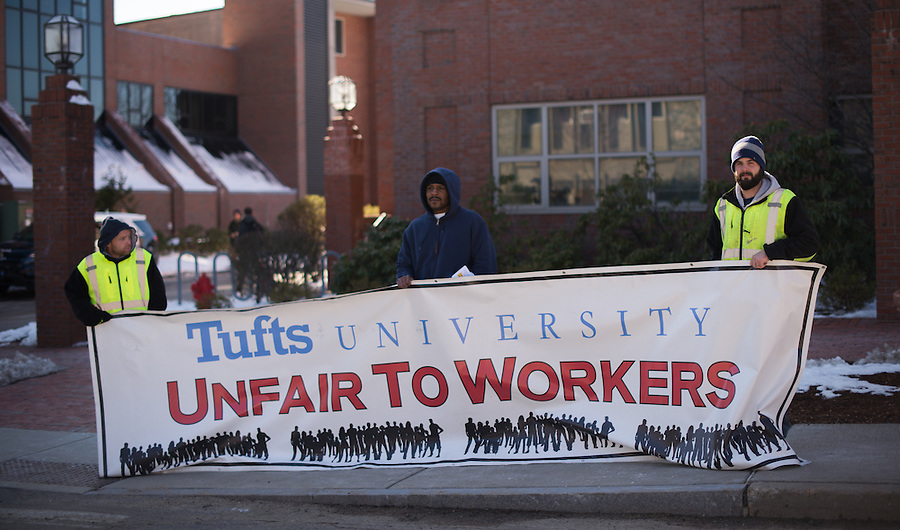 Tufts University workers from the Local 6 Union stand outside Fletcher with signs as President Monaco conducts a town hall meeting inside the building on April 5. (Sofie Hecht / The Tufts Daily)