Activists CeCe Mcdonald and Joshua Allen open their #BlackExcellenceTour in the Alumnae Lounge as the second event of Israeli Apartheid Week on March 8. Sofie Hecht / The Tufts Daily

Joshua Allen, a black transgender-feminine organizer and abolitionist, and CeCe McDonald, a black transgender woman activist, spoke to an audience of over 100 people in the Alumnae Lounge last night as the first stop in their #BlackExcellenceTour, according to the event’s Facebook page.

The event was sponsored by a number of organizations and academic departments at Tufts including Tufts Queer Students Association, the LGBT Center, Loving Ourselves as Queer Students of Color in Action (LOQSOCA), Tufts Students for Justice in Palestine, the Women’s, Gender and Sexuality Studies program, the International Relations program, the Peace and Justice Studies program and the Consortium of Studies in Race, Colonialism and Diaspora. The talk was also held as the second event of the Student for Justice in Palestine’s annual Israeli Apartheid Week.

The speakers discussed their identities as black trans people and issues that the black trans community face, including violence and cisgender sexism. First-year Elise Sommers, who participated in the Creating Change conference in Chicago — an activist organization for LGBT rights — introduced the speakers, who she, along with senior Renee’ Vallejo, worked to bring to campus, following their experience at the conference.

Allen began the talk by acknowledging that the #BlackExcellenceTour is a space for members of black and trans communities. They asked members of the audience to recognize people in their own lives who have made an impact.

“None of us are here as individual projects,” they said. “It takes a lot for us to survive in the time we’re living in.” Allen linked the struggles of trans women of color to the Israeli-Palestinian conflict. They discussed “pinkwashing,” the notion that foreigners should be sympathetic to Israel because of Israel’s support of LGBT rights. Allen argued that pinkwashing is a propaganda tool that fits into a larger narrative of indigenous and minority people being labeled intolerant.

Allen continued to describe what “black excellence” can mean to those outside of the LGBT community and people of color in the United States.

“Black excellence is not limited to just certain people … It transcends all people, all spaces, all times,” Allen said.

McDonald then spoke about the place of trans people in public spaces and conversations, including her own experience as a trans woman of color.

“Black trans bodies are left out of conversations about black power,” she said. “We tend to get left out of the bigger picture about what liberation looks like.”

She noted that discussions about trans women both within and outside of LGBT spaces are often condescending or misdirected.

“We tokenize trans women,” she said. “We have this false sense of uplifting … [But] we [members of the trans community] are still left dealing with these issues of bigotry.”

McDonald focused on the idea of “decolonizing” her mind, a process of eliminating her preconceived ideas, and she encouraged others to do the same.

“Giving people an idea of where I’m coming from can be very confusing,” she said. “They come from a world that’s very black and white.” 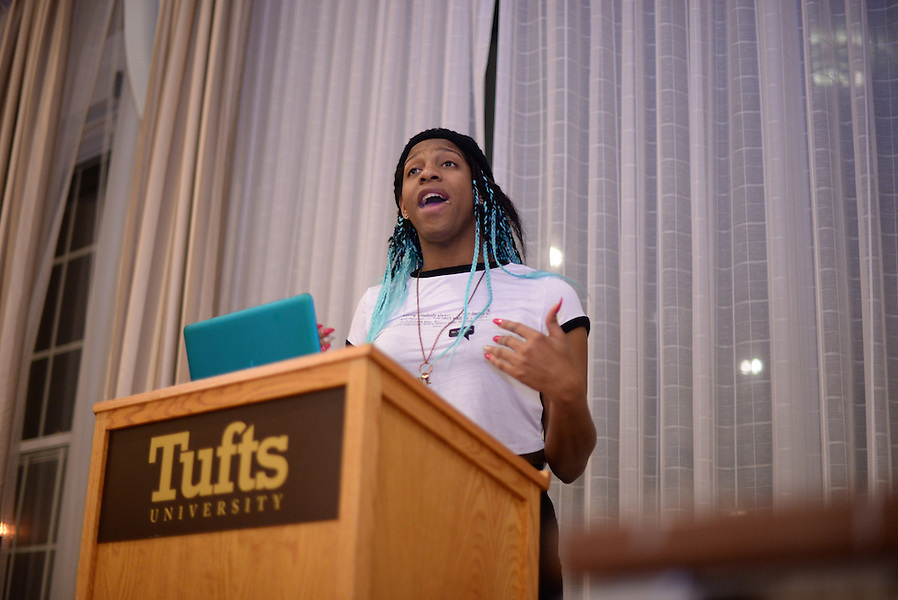 CeCe Mcdonald speaks at the opening event of the #BlackExcellenceTour in the Alumnae Lounge, the second event of Israeli Apartheid Week on March 8. (Sofie Hecht / The Tufts Daily)

She then denounced this analogy, noting that the world is mostly white, not black.

McDonald also commented on how trans women are treated and represented in the media and in the eyes of the general public.

“People don’t understand our lives are roller coasters,” McDonald said. “We deal with mental health issues and financial issues… People only hear about trans women when they’re on the red carpet or when they’re dead.”

She went on to criticize the leadership role in the trans community that Caitlyn Jenner, American television personality, has attained, condemning her support of conservative presidential candidates.

“Honey, I don’t think Ted Cruz is pushing for a trans ambassador,” she said.

She discussed how her experience with incarceration and the prison industrial complex has driven her to fight for issues affecting people of color and trans people.

The talk was followed by a question and answer session moderated by Vallejo, in which McDonald and Allen provided different interpretations of the term “ally,” commenting on how white, heterosexual or cisgendered people can support this movement.

“People throw around the term allyship like it’s a bag of funions,” McDonald said. “[People who are not within marginalized communities can] pick and choose which conflicts [they] want to get involved with … As a trans woman, my day to day life is confrontation.”

Allen argued that the term implies an unbalanced power dynamic.

“Allyship presumes a level of hierarchy that I don’t accept,” they said, noting that white, heterosexual and cisgendered people are often unfairly rewarded for speaking on issues that affect marginalized identities.

Both Allen and McDonald criticized the notion of “getting it” — people not belonging to minority groups understanding the struggles and experiences of those communities. They said that people should recognize their own privileges and act to reduce inequalities.

“Listen, learn and assist,” Allen said. “No, you can’t understand everything… But we can understand the nuances in our lives.”

The speakers encouraged members of the audience to think of black excellence as the foundation of a larger, more inclusive movement.

McDonald ended her portion of the event by addressing black audience members.

“Your black excellence is appreciated,” she said. “Wherever you are, let it blossom.”