Jack Trompetter (right) discusses his experience surviving the Holocaust, as a part of a panel of survivors of the Armenian, Bosnian, Rwandan genocides and the Holocaust during the Survivors Speak event on Feb. 17. Alex Knapp / The Tufts Daily

Approximately 60 people filled the chapel at the Granoff Family Hillel Center last night to hear survivors of genocide share their stories as a part of Tufts Against Genocide’s (TAG) 6th annual Survivors Speak panel. The event was held as a component of the Cummings/Hillel Program for Holocaust and Genocide Education.

Senior Shoshana Weiner and sophomore Mariel Kieval, both interns for the Cummings Foundation, introduced the event with a joint speech about the importance of remembrance. Weiner and Kieval organized the event in conjunction with TAG President Caroline Atwood. In their speech, they said that while the phrase “never again” is often used while discussing such atrocities, events of genocide continue to happen to this day.

The first panelist to speak was sophomore Nairi Krafian, the great-granddaughter of Hagop Madoian, a survivor of the Armenian Genocide.

“My experience is so different from [his],” she said.

Krafian shared snippets of her great-grandfather’s fractured childhood working as a forced gravedigger, who recorded the surreal experience of living among the dead in a journal. “Nobody would pay any attention,” she shared from his journal. “People died, and deaths went unnoticed.”

Krafian said that the repercussions of the Armenian Genocide, where masses of Armenian people were murdered in 1915 by the Ottoman government, have been passed onto her, and “that discomfort influences [her] life.” She said she maintains a deep connection to her Armenian identity, and takes pride in what she describes as the failure of the Turkish people to extinguish her own.

The next panelist, Holocaust survivor Jack Trompetter, said that genocide stems from a process of demeaning and dehumanizing another people.

“To have a genocide, you need to have ‘the other.’ Once you have that other, the path is clear for an atrocity to occur,” he said.

Trompetter was born in Nazi-occupied Holland in 1942, and was separated from his family as they split up to avoid persecution, ultimately reuniting with his family at the close of the war.

“When people went into hiding in those days, nobody had any idea how long it would be,” he said. “I was one of the lucky children.”

The next panelist, Edina Skaljic, spoke about living in constant fear during the Bosnian Genocide, where ethnic cleansing in the late 1990s took the lives of thousands of Bosniaks. Skaljic said she remembered being given a shopping bag by her mother, and being told to pack only what she needed while leaving their home.

“I didn’t understand. Why did I have to choose?” she said. “That was the moment my childhood ended.”

Skaljic said out of fear of danger, she was forced to assume a new name and hometown to shield the truth of her heritage. She recalled arguing with her mother at the time about pretending to be something she was not.

“Your name could actually mean life or death in Bosnia at that time,” she said.

The last panelist to speak was Claude Kaitare, a survivor of the Rwandan Genocide, where the Tutsis were being targeted and slaughtered by the Hutu majority in 1994. Kaitare said the conflict began without warning; suddenly, neighbors were turning on neighbors, and weapons and checkpoints were sprouting up everywhere. 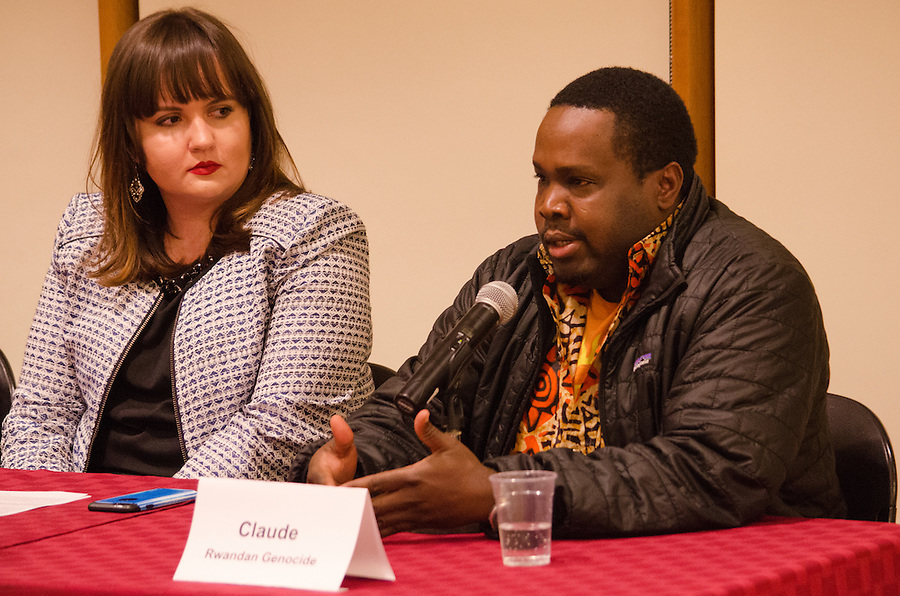 Tufts Against Genocide hosted the Survivors Speak event on Feb. 17, where survivors of the Armenian, Bosnian, Rwandan genocides and the Holocaust spoke about their experiences. Claude Kaitare (right) tells his story of surviving the Rwandan genocide. (Alex Knapp / The Tufts Daily)

He recalled a time when a Tutsi boy went up to a checkpoint and was beat by the guards with the blunt ends of their machetes. One guard hit the boy with the wrong side of the blade, drawing blood, he said.

After the boy fell to the ground, the guards announced they were taking him to the hospital, which was really “a mass burial place,” he said.

The survivors on the panel all spoke about the importance of remembering genocide.

“In telling you these stories, that makes you witnesses,” Trompetter said.

Students should now carry the burden of preserving his history, he said. Skaljic echoed this sentiment, expressing her fears that their stories of death and survival would go untold.

“Silence is betrayal,” she said. “We say we have to forgive, but not forget.”

The panelists also discussed the difficulty in the healing process after surviving genocide. All of them said that no survivor can ever fully recover, but that educating the next generation helps survivors personally come to terms with their difficult histories.