11/25/14 – Medford/Somerville, MA – Individuals in the South Bay Correctional Facility animate in their windows during the Indict America rally in Boston on November 25th, 2014. (Nicholas Pfosi / The Tufts Daily)

Peaceful protesters, including over 80 Tufts students, marched through Boston on the night of Tuesday, Nov. 25, shutting down Roxbury streets before clashing with police at the I-93 ramp by the South Bay House of Correction. The protesters joined thousands across the country who took to the streets in reaction to a Missouri grand jury’s decision not to indict white police officer Darren Wilson. Wilson shot and killed unarmed black teenager Michael Brown in Ferguson, Mo. on Aug. 9.

Of the estimated 30 to 45 people arrested, four were Tufts students, including Daily Executive Photo Editor Nicholas Pfosi who was covering the event. According to Jay Dodd (LA ’14), one of the event’s organizers, the charges against the students were dropped.

Junior Renee Vallejo was one of the students arrested during the protest.

“I was put in a choke hold, thrown to the  ground and pinned down by an officer’s knee to the head and entire body on top [of] my legs,” Vallejo said. “I was thrown into the men’s jail truck because the officer refused to believe I was female … [and] sexually violated because the officer wanted to see that I was really female bodied.”

“I saw several facial abrasions [and] a young woman had a sprained ankle,” Dodd said of the arrests in general in an email to the Daily.

The Boston Police Department Office of Public Information could not be reached for comment. A protester stares down a police officer during the Indict America rally in Boston on Nov. 25 2014. (Nicholas Pfosi / The Tufts Daily)

The protest focused on larger patterns of police racism and brutality while also expressing outrage about the Wilson verdict and Michael Brown’s death.

“The protest was planned either way,” Dodd said of the verdict.

The rally began in Dudley Square, where hundreds were assembled by 7 p.m. After a four-and-a-half minute moment of silence — the time representing the number of hours Michael Brown’s body remained in the street after his death — protesters came to a microphone to speak, expressing not only their frustration with the grand jury’s verdict, but also indignation with a justice system they framed as inherently unjust.

“We live this,” one woman said. “Black lives matter. It is not a hashtag — it is a f—ing reality!” Between speakers, the crowd — estimated at 1,400 to 1,600 people — passed around a candle in memory of Michael Brown and held signs proclaiming “Black Lives Matter” and “Justice for Mike Brown.” Chants of “Hands up, don’t shoot!” rang through the square.

“Freedom will not be handed to you. You have to take it!” a 54-year-old woman said. After speaking, she led the crowd in a spontaneous rendition of “Redemption Song” (1980).

At the urging of organizers positioned in the back of a flatbed truck, protesters began to march past the Roxbury District police station and down Dudley Street. Community members stood on the sidewalk, taking photographs and cheering.

Protesters made their way down Melnea Cass Boulevard to South Bay House of Correction, where they met a police barricade on the I-93 onramp. The protesters’ goal was to march onto the highway and shut down traffic.

As the crowd solidified in front of the barricade, constantly chanting, inmates at South Bay House of Correction began to cheer, some banging on their windows and flashing the lights in their cells. Many members of the crowd clapped in response to the inmates’ support, some throwing their fists in the air to express solidarity with those behind bars.

As some protesters attempted to push through the police blockade, police insisted that they step back. The crowd responded with chants of “You step back!” and “No justice, no peace, no racist police!” According to sophomore Nic Serhan, many of those at the front of the group were Tufts students. 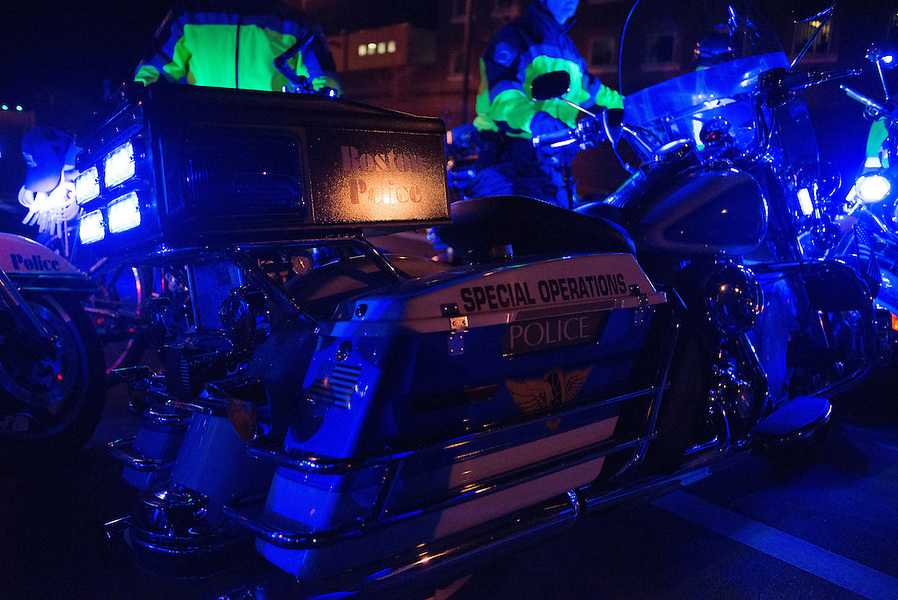 Boston Police use their motorcycles to form a barricade on I-93 during the Indict America rally in Boston on Nov. 25, 2014. (Nicholas Pfosi / The Tufts Daily)

“I’ve never been so proud of the student body here … when I was at the front lines of the protest I saw Tufts students all around me, and we linked arms and chanted,” Serhan said. “It’s amazing to feel support like that.”

Organizers prepared for confrontation, directing “white allies to the front,” in the belief that police would be less likely to arrest or harm white people. 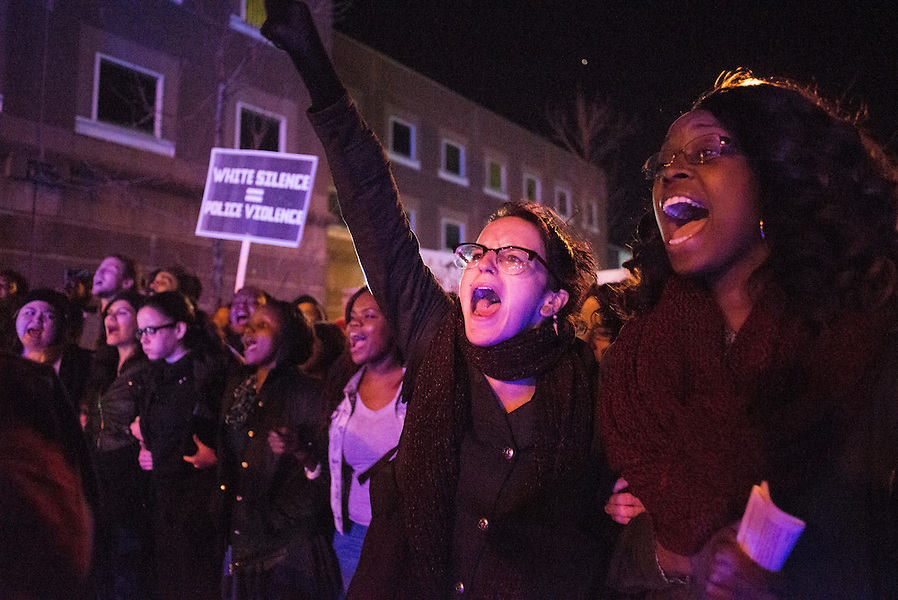 “The police and the United States don’t value black bodies — they value white bodies,” Victoria Gibson, a junior who was at the front of the protest, said. “If you are going to create a barricade with the police, logically it should be white people at the front going head-to-head with them.”

Although struggles broke out between police and protesters at the barricade, the majority of people were peaceful in their expressions of anger. According to Dodd, confrontation with police was foreseen.

“I knew the cops would provide a significant and more forceful presence than at other actions,” Dodd said. “This work was about confronting police head-on, and the violence, though still jarring, was expected.” 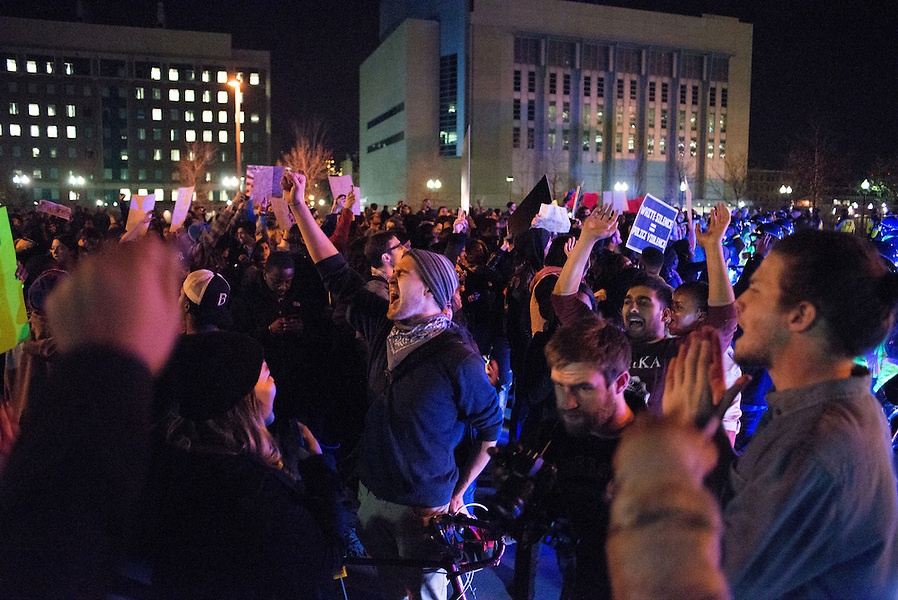 According to Serhan, protesters eventually left the I-93 on-ramp, marching back to Dudley Street. They encountered a police blockade once more outside South Station.

“When the cops were getting really brutal by the jail we walked back towards downtown, took over Massachusetts Avenue and then Boylston Street … There was another blockade of police at another 93 exit ramp and also one right outside South Station,” Serhan said.

Although some of the protests have ended, for many activists the work is not over.

“This work is only the beginning,” Dodd said. “We will continue this work locally, while maintaining connected to the national movement.”