10/10/14  Medford/Somerville, MA  Tufts students assemble and rally for equal pay for part-time faculty at Tufts, marching from the Tufts academic quad to 200 Boston Ave on October 10th, 2014. (Nicholas Pfosi / The Tufts Daily)
After eight months of negotiations, representatives of Tufts and its part-time faculty reached a tentative contract agreement this Friday. The terms of the three-year contract will not be made public until all part-time lecturers vote to ratify the contract later this month, according to Director of Public Relations Kim Thurler.

The part-time lecturers, represented by the Service Employees International Union (SEIU), unionized last September and entered negotiations with the university in February. The university had already agreed to many of their requests prior to Friday’s bargaining session, according to bargaining committee member Andrew Klatt, who has taught for 18 years in the Department of Romance Languages.

“Up until now, the negotiations have been incredibly positive,” Larry Alcoff, SEIU’s chief negotiator for Tufts’ part-time faculty, said before meeting with the administration on Friday. This most recent session was focused on lecturers’ financial concerns, which Klatt said had caused friction previously. Part-time faculty members, as the only members of Tufts’ staff not to receive raises since a 2008 pay freeze, have taken an effective 11 percent pay cut in real dollars over the past six years. The university initially offered a 2.25 percent salary increase in a Sept. 17 bargaining session, which Klatt said would not stand.

“The negotiations have been congenial until the last meeting,” he said. “The reaction from the union bargaining committee was strong.” “Given the context of the rest of the budget, we think it’s completely reasonable,” said Daniel Weaver, a sophomore who organized Tufts Labor Coalition’s (TLC) rally to support the part-time professors before Friday’s meeting. 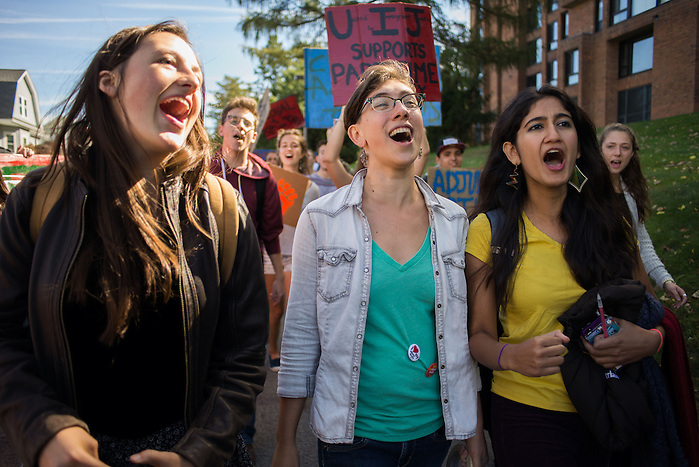 The union’s central demand was “equal pay for equal work,” meaning the same payment per class as first-year full-time lecturers, which they estimated would cost the university approximately $1.5 million per year, according to Klatt. The university’s yearly operating expenses totaled $767 million in fiscal year 2013, according to the university’s Budget Office. According to a union fact sheet, $1.5 million is 10 percent of what the university spent on just travel for administrators in fiscal year 2013 alone. “They certainly treat their bigwigs pretty swell, don’t they?” Klatt shouted to the crowd at the rally.

Tufts’ union, which only includes members of the School of Arts and Sciences, is part of a growing movement across the country in support of what are usually called adjunct professors at other universities. While unions have formed at other Boston-area schools including Northeastern University and Lesley University, Klatt said that Tufts’ values make it a logical testing ground for union success. “It’s not just a question of dollars and cents. It’s a principled position,” Klatt said. “Tufts is very proud of itself, Tufts wishes to be a model and Tufts should show the way.”

On Friday afternoon, upwards of 75 students joined union members on their walk past Ballou Hall to 200 Boston Ave., where the final round of negotiations took place. TLC President Lior Appel-Kraut noted that students and parents pay the same tuition and expect the same quality of education for each course, regardless of the professor’s part-time status.

“We hope that the administration will see why it’s crucial,” Appel-Kraut, a sophomore, said. “They are devaluing our education.”

Klatt, who teaches Spanish language and translation, said he takes his students’ needs as seriously as a full-time professor would and makes a full commitment.

“Some of my most fulfilling classroom experiences have been with part-time professors,” Blaine Dzwonczyk, a sophomore who attended Friday’s rally, said.

In previous meetings, administrators had told Klatt that, from an economics standpoint, the lecturers were disposable and thus did not require pay increases, according to Klatt.

“You can’t hide behind the market,” Alcoff said. “That’s not an acceptable argument.” According to Klatt, however, the administration had already agreed with union representatives to reduce this “disposability” by providing longer-term contracts — for up to three years — for professors who have spent more than eight years at Tufts. He said that they would also guarantee part-time lecturers a certain number of courses per semester based on the average number of courses taught in the past three years, which is crucial as the lecturers are paid per course. They also resolved the issue of canceled courses, for which professors currently receive only $750 but in the future would be fully compensated for, according to Klatt.

Most lecturers supplement their Tufts salary with outside work — Klatt teaches private Spanish lessons and completes translations — but none of these part-time jobs provided health insurance. Klatt said the university had not yet agreed to a healthcare subsidy prior to final negotiations.“Currently we are known as ‘at-will employees,’” he said. “The university decided that we were the most vulnerable.” Although the extent to which the union’s demands have been met remains unclear, a joint statement released by the university and SEIU expressed unilateral support for the proposed contract.

“We recognize the valuable contributions our part-time Arts and Sciences faculty make to the vibrant academic environment at Tufts,” Interim Dean of the School of Arts and Sciences James Glaser said in the statement. “We believe this contract reflects our commitment to recognizing those contributions within the overall context of the university’s priorities.”

Thurler said the university looks to conclude the process in October, after a vote of the entire part-time teaching staff — about 200 people, making up approximately one-third of the instructional faculty.

“Our tentative agreement with Tufts University reflects the institution’s long tradition of an inclusive and collaborative environment,” Klatt said, declining to comment specifically on the results of Friday’s negotiations. “Our negotiations were not always easy, but were always conducted in a respectful, honest and collegial manner with the Tufts administration’s committee. We will recommend this proposal to all the part-time lecturers who will vote to approve it later this month. We believe it sets a high standard and balances the university’s stated need for flexibility and our goal of winning greater stability and security as members of the Tufts faculty.”