While each election cycle has its unique side, many argue that the 2016 presidential race has been one-of-a-kind, in terms of its candidates and their proposed policies. From their expertise in political science and economics, three Tufts professors discussed the race and the differences and implications of the candidates’ policies.

James Glaser, professor of American politics and dean of the School of Arts & Sciences, said he had expected a Clinton-dominated Democratic primary but not the Republican race as it’s evolved thus far.

“I’m not very surprised about what’s happening on the Democratic side,” Glaser said. “I think I’ve expected all along that Hillary Clinton would be the candidate. On the [Republican] side, I have been very surprised, as have a lot of my colleagues.”

Glaser said that while the GOP’s recent pushback against Donald Trump has been expected, Trump’s continued success has been markedly less so.

“I’m not surprised [that] the Republican establishment and media are shining a light on Donald Trump’s campaign and wringing their hands as the Republican party officials and Republican elite are now doing about his likely candidacy,” Glaser said. “But I am surprised that he’s the front runner at this moment in time. I have to say that I was incorrect, and I’ve been incorrect in saying that the likelihood of his being the nominee for the Republican party was very low.”

David Dapice, an associate professor of economics, discussed the proposed fiscal policies of the leading candidates. He said that the Republican candidates’ tax policies, while true to conservative ideology, won’t necessarily help the government make strides in deficit reduction.

“Republicans, for some time, have had a preference for broad tax cuts. And since the rich pay most taxes, if you’re going to reduce taxes significantly, unless you craft it very carefully, the tax reductions flow mainly who those who pay,” Dapice said. “The Republican tax proposals are serious in the sense that they do mean to reduce the tax burden of the rich, but they’re not serious in that they [do not] seek to improve to fiscal situation, which they have been crying so much about in terms of deficits.”

Dapice said his profession as an economist has influenced his views about the Republican candidates’ fiscal policies.

“As an economist, not as a partisan, I don’t take the proposals of the Republicans as serious fiscal measures to improve the deficit or reach fiscal balance of any kind,” he said. “[They] just can’t get there.” Dr. James Glaser poses for a portrait in his office in Ballou on Feb. 17, 2015. (Evan Sayles / The Tufts Daily Archive

However, Dapice had a different take on the Democratic side and noted the difference between Senator Bernie Sanders (I-VT) and Hillary Clinton, former Secretary of State.

“Sanders is a very decent human being. I personally like him, but his economics — there’s just no way he could reasonably pay people’s college tuitions and give everyone medical care and do that with any feasible tax increases that I can imagine,” Dapice said. “If people were willing to live like in Denmark or Sweden, where marginal tax rates are 70 or 80 percent, and quite a high fraction of one’s income is taken and there’s a sense of social solidarity, then his brand of democratic socialism would have more of a chance. So I just don’t take his spending proposals as being serious.”

Professor of American Politics Jeffrey Berry compared the two front-runners from either side of the race, Trump and Clinton, and their political opinions and policies. In particular, he explained their differences on one important issue: college debt.

“One policy for both Clinton and Trump, the issue was college debt. And Trump didn’t have anything on his website about it, and Clinton had a very detailed policy prescription for how she was going to try to improve things,” Berry said. “That doesn’t mean that if [Trump] is elected president that he won’t address the issue, but as of now he is not speaking out on this. He does have policies that he emphasizes more but his website was much skimpier than [Clinton’s].” 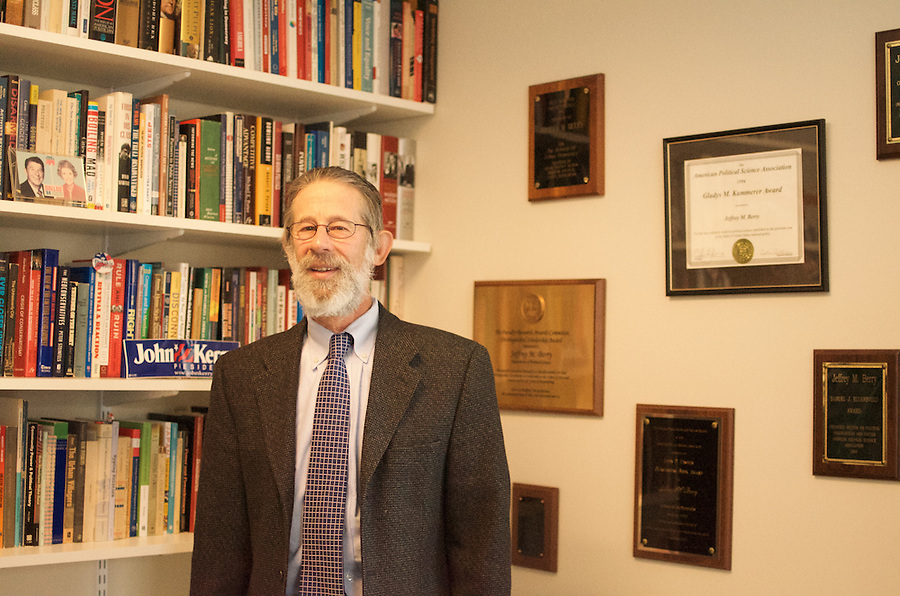 Professor of Political Science Jeffrey Berry poses for a portrait in his office in Packard Hall on Feb. 10. (Jiaxun Li / The Tufts Daily Archive)

On the other side, Dapice believes that Clinton has the most sensible and feasible plan, in terms of fiscal policy.

“So that leaves Hillary,” he said. “Hillary is sober, she is modest, she has good advice and she certainly in the right ballpark in terms of what she suggests in terms of taxation and spending … If you’re grading people on fiscal sanity, Hillary gets a fairly good grade and everyone else does poorly.”

However, regarding Clinton, Dapice also posed the question that is currently dividing the Democratic party.

“Is [Clinton] interested in changing the system, or simply playing well within it?” he said.