Examples of objects printed by a 3D printer are displayed in one of the 3D printers in the Tufts Maker Studio on the third floor of the Collaborative Learning and Innovation Complex (CLIC) in the Human Factors Lab on March 30. Sofie Hecht / The Tufts Daily
Paid Advertisement

Andy Braren wanted to make building things easier at Tufts. With this goal in mind, in 2013 — during his sophomore year at Tufts — he started Tufts MAKE as a subgroup under the Tufts Human Factors and Ergonomics Society (THFES). Tufts MAKE had a fun first project: an oreo de-creamer. As the team worked on multiple prototypes toward the final product, Braren, now a Tufts graduate student currently studying Human Factors, found that acquiring resources and attracting student interest for the project was fairly difficult.

However, Braren came up with an idea to solve the problem: create a network of makers. He worked to connect THFES, the Crafts Center and Crafts House, Tufts Robotics Club, Tufts Entrepreneurs Society and Tufts MAKE to share resources, student support and an appreciation for “learning by making.” This became the Tufts Maker Network.

According to Braren, the network was established last semester. After all the organizations met with one another, there was consensus that these various making-related organizations had many opportunities to collaborate, leading to the Maker Network’s kickoff event, Weekend of Making, early this February. According to a Feb. 9 Daily article, the event had a 150-student turnout for a wide range of workshops from pottery throwing to LEGO robotics.

He cited the success of the Weekend of Making as an example of the need for the Maker Network, as it allows the participating organizations to share their knowledge and skills with a larger student community, Braren said.

“One club could not have pulled that off,” Braren said. “It was the collaboration that really made that possible.”

The interdisciplinary nature of the Maker Network is characteristic of makerspaces, according to Brian Gravel, an assistant professor and director of elementary education in the Department of Education. Gravel has been researching makerspaces, which offer opportunities to work on interesting or personally meaningful projects and problems and look at them through an interdisciplinary perspective.

“You historically have shops that are organized more by discipline,” Gravel said. “So you have art studios, or you have a woodshop, or you have a metal shop. Makerspaces look at the intersection of lots of different types of technologies, skills and practices. You have artists working alongside engineers. You have human factors majors thinking about the design of products alongside child development majors thinking about how kids can engage differently with technology.”

There are multiple spaces on campus that the Maker Network website describes as having “the material and equipment you need to turn your ideas into reality,” many of whom have been either established or renovated within the past five years. The Digital Design Studio was added to Tisch library in 2011 and renovated last year. The Crafts Center was renovated from 2014-2015 and has new technology like 3D printers and soldering supplies. The Bray Lab behind Anderson Hall is undergoing renovation, and the Tufts Venture Lab, Tuft’s first co-working space for student-run startups, is part of the new 574 Boston Ave. Collaborative Learning and Innovation Complex (CLIC), according to the Maker Network website. The Jumbo’s Maker Studio opened on 200 Boston Ave. in June 2014, while most of its electronics and 3D printing equipment have been moved to the new Maker Studio at CLIC, which officially opened with the Weekend of Making, according to Braren.

The growth of makerspaces on campus reflects the growth of the maker movement at large. According to Braren, when technologies like 3D printing, Raspberry Pi and Arduino reached accessible price points, the maker movement took off. Braren said this encouraged maker communities to arise in spaces like libraries and high schools.

An example of this is Malden High School. Gravel and his colleagues worked to reinvent the basement of Malden High School into a makerspace, Nedlam’s Workshop, where students can come after school to build, 3D print or solder their own projects. Throughout his time at the school, which has high numbers of Latino and immigrant students, he has seen how makerspaces have the potential to change the face of engineering by diversifying the field.

“We know what engineering looks like to some degree,” Gravel said. “It’s often a sort of male-dominated, white, middle-class activity. Well now we’re beginning to recognize that when you put these kids in other types of settings, we can broaden or expand what we think engineering, science and design can look like. We start to find people do really interesting things with really rich knowledge of their communities, and how they can solve problems in their communities. These sites become new places for people to become empowered problem solvers.”

Thomas Coons had not been exposed to this kind of student-led environment until he joined Tufts MAKE. A first-year student majoring in mechanical engineering, Coons was introduced to Tufts MAKE during the Weekend of Making. Since then, he has been exposed to the tools and equipment available in the Maker studios and wants to continue working with them in an outside-the-classroom setting.

“I went to a public high school that didn’t have an engineering department at all,” Coons said. “I guess the reason why I got involved [with Tufts MAKE] is because I know [Tufts has] a crazy amount of equipment and cool things, and I’m going to have to learn it at one point, and I’d rather not learn them in a class — you probably wouldn’t learn them all in a class. So I figured it’d be kind of cool to make things in a workshop instead of [for] a professor.” 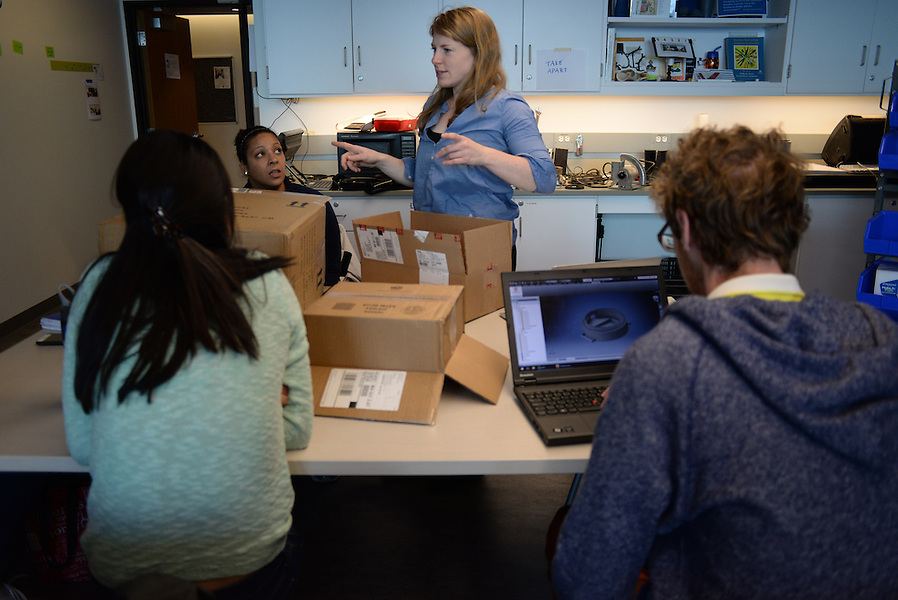 Students in an Occupational Therapy Masters class on pediatrics work together to design a low tech assistant device for a case study with Tufts Maker Network member Amy Fleischer, standing, in the Tufts Maker Studio on the third floor of the Collaborative Learning and Innovation Complex (CLIC) in the Human Factors Lab on March 30. (Sofie Hecht / The Tufts Daily)

The diversity of the student body and the range of perspectives they bring to projects are part of what Coons identified as a benefit to learn in a workshop, rather than in a classroom.

“So far only half the people I’ve talked to are engineers…,” Coons said. “At first, I thought they’d all be engineers. It’s nicer that it’s not — you get a lot of different viewpoints. Also, people are there because they want to do it, not because they have to do it for a class.”

Braren also attested to the benefits of an interdisciplinary group of makers.

“Part of these makerspaces and this maker movement is definitely encouraging students from different disciplines to talk to one another, which isn’t something we do often in college, unfortunately. But [we] do all the time when [we] go to the real world and start working on this and start making things for real,” Braren said.

However, Braren also recognized that despite attempts to bring arts and engineering students together through the Maker Network, there is still a visible gap between more art-focused and engineering-focused makerspaces on campus.

According to Crafts Center Co-manager Helen Sibila, the Craft Center’s organizational and technological renovations help create a more accessible and welcoming learning environment for artists and makers. According to a Dec. 4, 2014 Daily article, one of the center’s goals for its renovation was to improve functionality and accessibility.  Sibila, a sophomore, says that the newly organized Crafts Center space eliminates the search for supplies, creating a more productive working environment and making the center’s resources easier to navigate for new visitors.

“It a lot easier to get things done if things feel easily accessible,” Sibila said. “I think it felt a little socially exclusive because you needed to know where things are.”

The Crafts Center is also planning on implementing new technology to make learning new artistic processes an the center easier and safer for its visitors. According to Sibila, the center is currently working on instructional guides to teach new users about the proper use of different tools like paints and the sewing machine. Sibila said she envisions a future Crafts Center having tablets and monitors that show instructional videos, as she hopes that these videos will promote proper and safe use of the center’s more complex machines and encourage more non-arts students to come and learn new skills.

“We’re also integrating technology into teaching because what Crafts Center wants to do is [to] make these kinds of materials and art processes and maker processes more accessible to people who don’t know about them,” Sibila said. “So anyone who wants to learn how to use a sewing machine can just come in and learn, and anyone who wants to know how to make ceramics or use the 3D printer [can learn]. It’s not some sort of exclusive ‘you have to be an engineer or you have to be an artist.’ You can come just come in and learn how to do it.”

The Tufts Maker studios are always working towards making the spaces welcoming to everyone in the community who are interested in making. According to Fay Shaw, a postdoctoral fellow at the Center for Engineering Education and Outreach (CEEO) and co-manager of the maker studio at CLIC, the Maker Studio welcomes all Tufts community members through social events like Waffle Nights and workshops that are accessible to people of all experience levels and backgrounds.

“[Maker studio] is open to all of Tufts students, staff and faculty,” Shaw said. “This isn’t a place just for engineers. It’s hopefully a place where people can express their creativity.”

With the makerspaces reaching out to a wider community of students and the Maker Network positioned to bring the different maker-related organizations together, Braren believes the maker movement at Tufts is stronger than ever.