Dutch ReBelle, a Boston-based MC, performs at the Trapfest 2016 hosted by the Tufts University Africana Center on April 29. Jiaxun Li / The Tufts Daily

Anyone walking down Professors Row on Friday afternoon would have heard the flying verses of Dutch Rebelle, seen students gathered on the grass of the Africana Center yard, felt the energy and come to the same conclusion about TrapFest that was being shouted by the crowd: it’s lit.

Tufts’ first annual TrapFest outdoor music festival featured Brooklyn rapper Asoh Black and local artists Dutch Rebelle and the Trap Music Orchestra. Asoh Black, a friend of one of the organizers, was accompanied by Tufts student DJ Tones, or Antonia George. Playing with a dandelion tucked behind his ear, he rapped to some of his original songs “96 styles,” “96 styles part 2” and the song “Lettuce,” featuring Bad and Blue rapper Cameron Flowers.

Dutch Rebelle, who was at Tufts for the Pan-Afrikan Alliance’s Black Solidarity Week last November and was named the “Hip-Hop Artist of the Year” at the 2014 Boston Music Awards, performed songs from her EP “Kiss Kiss” (2015) such as “Air it out” and “Whatchu Like.”

The Trap Music Orchestra, a big-band mix hip-hop group that brings together Berklee College of Music students and graduates, closed out the event. Their arrangements of Billboard-charting songs like Kendrick Lamar’s “Alright” (2015) and O.T. Genasis’s “CoCo” (2014)  mixed trap with hip hop and new era jazz.

Organized by the Tufts Black Jumbos with the African Student Organisation (ASO), the Pan-Afrikan Alliance (PAA), the Black Students Union (BSU), the Caribbean Student Organization (CSO), and Loving Ourselves as Queer Students of Color in Action (LOQSOCA), TrapFest was an effort to plan an event for the black community and communities of color as well as local black artistry, according to one of the coordinators, junior Arturo Muñoz.

“Historically, the Concert Board hasn’t brought artists that particularly interested the black students and the student of color community on this campus more broadly,” Muñoz said. “And so these ideas came out of complaints where people were like ‘who is Børns and Matt and Kim.’”

Vicky Adinkra, another coordinator, said the whole idea started to really take off when some members on a Facebook group page called Black Jumbos discussed the feasibility of what she called an “anti-spring fling”. Because TrapFest replaced the BSU’s annual Block Party event, which is typically on Spring Fling weekend, organizers were able to join those funds with money from the budgets of organizations and different collaborations.

“[We’re] trying to really make this campus a place for black students,” Adinkra said. “This has really been a topic of conversation a lot within the black community these past two semesters… all this intentional work that we’re trying to do to make sure that our experience is the experience that we want it to be.”

According to Muñoz, part of that intentionality involves inviting artists that are specifically local or somehow connected to the community at Tufts and supporting people who are part of Boston’s up-and-coming hip hop, rap and trap scene.

“We thought that it would serve as a way for students of color, and more particularly black students, to connect to the city a little more, because I think sometimes it is difficult for a community of color to feel like there’s something keeping us here,” Muñoz said. 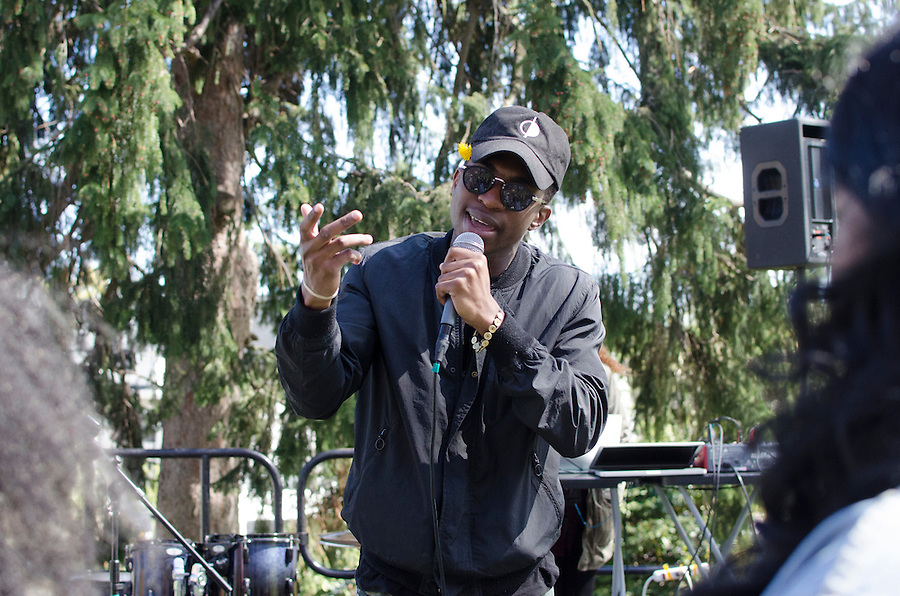 For Adinkra, building community and a strong support system means utilizing things like the Black Jumbos Facebook group, which was created for black-identifying students and those of the African diaspora, to network and share opportunities such as internships and local events. The group invited students from schools like Harvard, Emerson and Babson to the festival.

Both Adinkra and Muñoz hope to make the festival happen every year and to create a space where Adinkra says students of color can “feel safe, feel comfortable, [and] feel like they can be a part of this event.”

Although budgetary constraints continue to press groups for money and limit group expansion, Adinkra hopes that this event will create new traditions and show a larger presence of the black community.

“As black students and as leaders in the community, and working with Africana Center, we wanted to put something together for our community and show people that we are here,” Adinkra said. “Yeah, we may be three percent, but we are here.”

Correction: The original version of this story referred to the song “Lettuce” indirectly as a song by Cameron Flowers, when it is actually a song by Asoh Black, featuring Flowers.